noun
1. A nosh is a small snack or meal.

verb
1. To nosh is to eat a small snack or meal.

Note: Nosh is both a noun and a verb. 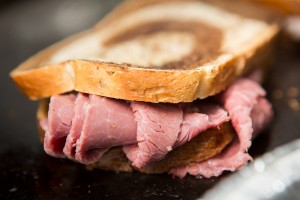 Corned Beef is beef cured or pickled in salt or a brine. The term “corned” comes from the use of large grained rock salt, also known as “corns” of salt. Other spices and sugar are often added to corned beef recipes. Corned beef is commonly served on rye bread as a sandwich or in a hash.

Pastrami is similar to Corned Beef, but  a spice rub is added to give pastrami its characteristic blackened appearance.  The rub typically consists of of black pepper, coriander, mustard seeds, fennel seeds, and sometimes fresh garlic.  Pastrami is also a smoked meat while corned beef is typically boiled.

Rye Bread is a variation of bread made with flour from rye grain. It can be light or dark depending on the types and proportions of flour used. Rye bread is considerably denser than bread made with only wheat flour. It offers a higher amount of fiber and a stronger flavor compared to white bread.

Rolled Stuffed Cabbage is a dish consisted of cooked cabbage leaves rolled around various fillings. Common fillings often include beef or lamb and a variety of seasonings and spices. Rolled stuffed cabbage is usually accompanied by a sauce. 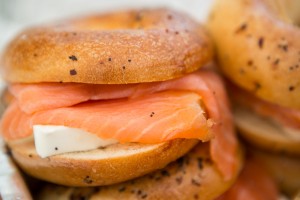 A Bagel is a piece of bread that is shaped by hand into a ring shape. However, what really defines a bagel is how it is cooked. Bagels are first boiled in water and then baked resulting in a dense and doughy interior and browned exterior. Bagels are often served with cream cheese and lox.

Lox is a filet of brined salmon. Lox is served on a bagel with cream cheese and is typically garnished with tomato and red onion. Capers are also commonly found on a bagel and lox.

A Knish is an Eastern European snack food consisting of a filling that is covered with dough and then either grilled, fried or baked. The filling can consist of a variety of foods, but most commonly mashed potatoes, ground meat, sauerkraut or cheese. 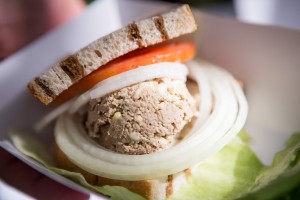 Chopped Liver is a spread often made by sautéing or broiling liver and onions, adding hard-boiled eggs, salt and pepper, and grinding the mixture together. The spread is commonly served on rye bread as a sandwich.

Rugelach is a small pastry consisting of dough wrapped around filling into a crescent shape. Rugelach can contain a variety of different fillings including cinnamon, chocolate, poppy seed and various fruit preserves.

Challah is a braided egg bread that is eaten on the Sabbath and various Jewish holidays.